Alternatives to saying No! Don't! Stop! without giving in

Do you have what it takes to go to the next level of parenting?
Everyday skills for creating everyday breakthroughs
The advanced skills
Frequently asked questions and their intelligent answers
Finances and Money: How to say NO.. sorry, can't buy it now!
Toddlers: How to adapt the skills for the toddler phase.

Skill: Tell me more about why you really want this

Cooperation is more about 'shared values' than obedience.

Showing interest is a great way to keep cooperation going.

I recall a situation a few years back when my brother said he wanted to buy a farm and become a sheep farmer. He knew nothing about farming let alone sheep. According to my point of view, this was financial madness. I just wanted to give him all the reasons as to why he was crazy!!!!

I just managed to hold my tongue in check, but I was so fired up I could not think at all clearly and knew I could not say anything constructive…

In that way I could just listen and process what he said opposed to my reacting and possibly damaging our relationship.

But what was really insightful for me that day, was that by just asking him to share his reasons and thinking, he actually talked about all the concerns and issues I had wanted to share with him. He told me that on the one hand he felt crazy about this decision, but on the other it was something really important to him that he was willing to go for.

At the end of his sharing, he had said all the things I had wanted to tell him, and he had given the reasons as to why he still wanted to do it. If I had just blurted out all my concerns and reservations, he would have just got angry back at me and shut down the conversation.

So when you are next in a situation where your child asks you for something, and you think they are crazy… try and hold your opinion in check, and just create some space to listen and think by using this skill: 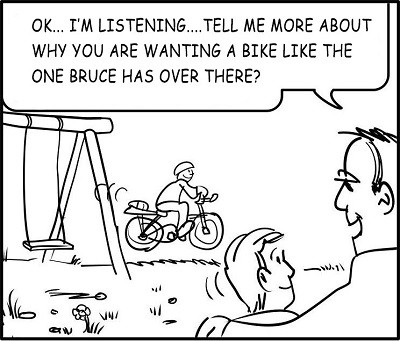 When you ask your children to share more about their desire for something, it shows that you also value your child’s wishes and opinion. And in some situations, this is ALL that your child wanted. They might be more interested in having some quality time with you instead of the actual thing they are asking you for.

Children, just like adults, want to be heard. Instead of jumping straight to “No!,” ask your child WHY he wants something. If he gives a reasonable answer, consider saying yes or at least offer to consider it again later. This will show your child that you value his opinion, which will help build confidence.

And if you are able, then try this advanced skill. It requires a bit more of self control from you but is well worth the effort in learning.

“Tell me more about why you really want this, and how you will resolve the concerns you think I have about this. 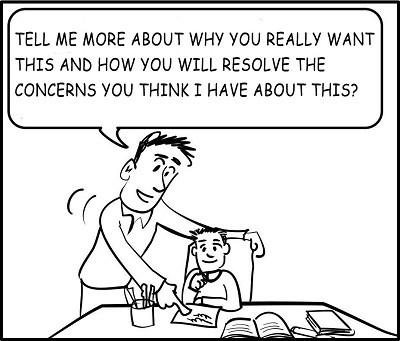 Now your child will need to share what they need, as well as what they can do to address your concerns about it. Once again we are getting our children to think broader than just what THEIR needs are.